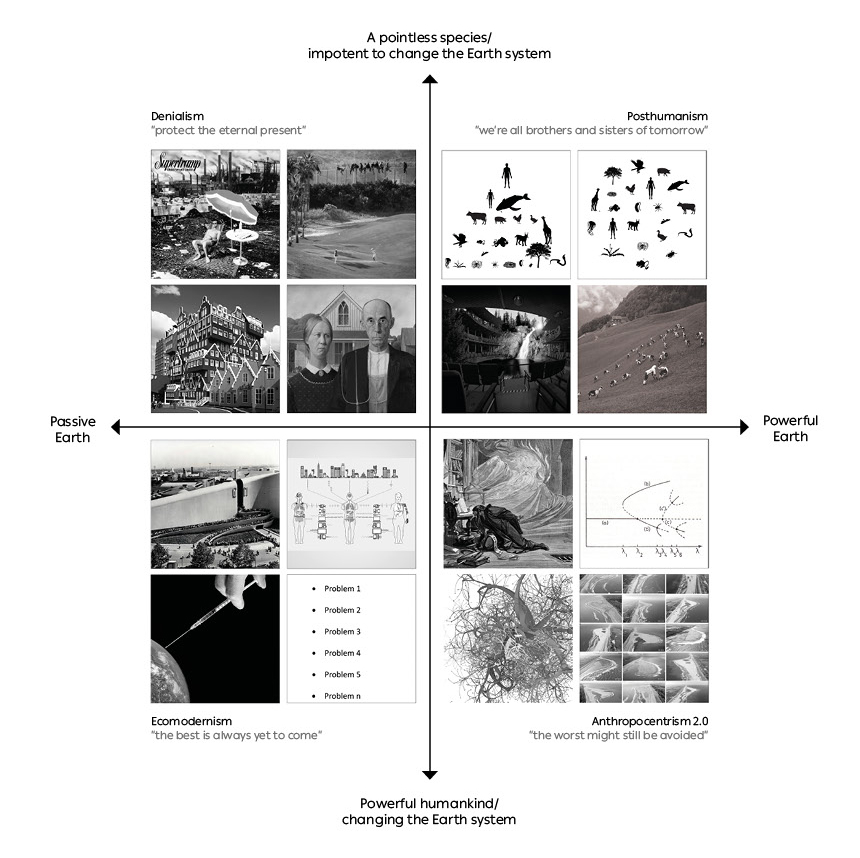 Different positions in the Anthropocene – The Age of Humankind. Adapted from the unpublished manuscript of Mobilis in Mobile by Dutch Lanscape Architect Dirk Sijmons (2021)3

This summer has been marked by natural disasters. Rivers and lakes have been turning dry in the middle of Europe, disrupting trade, limiting drinking water and withering agricultural land. Once again we have seen the consequences of climate change. By now it may seem redundant pointing out it is our own doing that brought about this changing condition. But sadly, there are still a lot of people who won’t believe or keep themselves oblivious about their impact on the Earth. Continuing life as usual, bathing in their privileges and eating on the wealth colonolialization brought, and still is, bringing about to “protect the eternal present”. But just because the impacts are not visible right here doesn’t mean they are not happening.

Take for example consumer choices – buying a cheap shirt in H&M directly impacts the life of workers in China or Bangladesh and the health of nature in the surroundings of the factories. On a planet with limited resources it feels obvious that at one point this lifestyle and worldview of denialism will hit the disaster wall. But where else is there to go to and how do we get there?

Well, let's find a solution for it! After all, “the best is always yet to come” and through engineering we can solve the problems we encounter. No? Let me prove it: fossils turn into hydro, linear into circular and pollinators into flying machine-bees. Freshwater we extract from the oceans and carbon we store in the North-Sea! And if, because of unknown side effects, all goes wrong – let’s colonize Mars!

Stop. Let’s breathe and take a step back. Let us imagine we live in a continuum of time. We cannot go backwards. This circular notion of time is creating a place that is shaped by actions and reactions. Every action one takes has a smaller or bigger influence on a certain place and time in the future. Each of them are constantly altering the world we are living in and the one of future generations – either consciously or unconsciously. Evolving out of this is a complex system of interdependencies.

Taking this into consideration one could argue that each single action is important for the development of the future. Therefore I want to argue that it is especially important that we get aware of the agency our actions have. If we simplify it one could say that our actions are guided by two things. By the past – the experiences one has had, the culture and knowledge one absorbed – making up the stories of one's life until that point. These stories make everyone react in a certain way. It is maybe something more passive, intuitive. Something that has been learned and internalized over a long period of time. And then there are dreams. They shape long-term goals. They help to keep being motivated, to continue going forward and they give purpose beyond pure existence. While pursuing dreams, active actions towards them are taken which may support their turning into reality. Let’s assume therefore, that dreams are mostly guided by intentions. And therefore they can be stirred by a bigger picture, by a vision.

A little bit more than a year ago I took part in the Dirty Old Town workshop by the Independent School for the City1. Together with landscape architect Dirk Sijmons and exhibition designer Herman Kossmann we tried to find our position in the Anthropocene. To help us navigate through it, Sijmons introduced us to four main positions towards the Age of Mankind, inspired by the theory of Clieve Hamilton2 (2017), an Australian philosopher and science writer. The four positions evolve around two main axes, the vertical one going from humans as a pointless species, impotent of changing the world's systems to a potent and powerful humankind and a horizontal axis going from a passive earth to a powerful earth which is reacting. An interesting side note – around 90% of all environmental discourse takes place on the left side of the quadrant seeing the Earth as passive. With 75% building upon engineering. Those two views are also the ones described previously at the beginning of the article. Whereas the left side is based on economic growth and deeply embedded into the values of neo-liberal capitalism, the right side seeks to understand natural processes and give voice to nonhumans. The main question dividing the two sides is: Who are we doing this for?

Let us look a bit more into the right side of the scheme: If we are not the only living beings on this planet, why do we act as if we are? Who gives us humans the right to exploit the planet, ravage its resources, contaminate its rivers, kill and extinct its inhabitants and still talk of ourselves as being a higher being? We should maybe start seeing humans as equal to all other forms of living beings and stop pretending to be any better. Focusing on individuality has diverted us from our actual being. Only once you see that “we’re all brothers and sisters of tomorrow” can we thrive in balance. And the divide that has been created between nature and culture can be closed for there exists neither one of them without the other. We have to ground ourselves on Earth. And go from a human perspective to a post-human or more-than-human future. Many questions arise from this view for example how can we give voice to and design for nonhumans? Or how can we effectively protect the ecosystems that support life on Earth?

Going one step further we may be able to see our agency in this world. If we don’t see humans only as equal to non-humans but also as the ones who have the ability and obligation to take responsibility for their actions, we may find a new aspiration. A place where we can restore what has been damaged. An attitude through which “the worst might still be avoided”. In this dream I see the many places where I can build backwards, where I can set free ecosystems. Places where I can learn from nature, its processes and try to help them thrive. Use my abilities to take care of the planet and its inhabitants. Listen to the ones we forgot to listen to and empower the ones we do not see anymore. It is a place where we take care of eachother, where there are commons we protect and foster, and where the reason we do things is not based on economic growth but on the wealth and diversity of the ecosystems surrounding us, constantly growing, constantly changing, and constantly becoming more complex.

In the light of today's climate emergency, with all the challenges right in front of us, it may seem far away, like a dreamscape in the distance. Unable to reach. But like argued before, time is relentless and each action can help shape the desired future. By being aware of the position we take and its consequences, we can take actions that will have consequences at a certain point and place in the future – even though we might not know exactly when. Furthermore, it can enrich the design process by actively guiding and letting it be informed by values of a certain worldview, working like an anchor to hold on to. In disagreement with others, it will help to be true to oneself since there is a bigger reason for it. Let’s start to dare things, to think outside the box, and open up our imagination for a shared future between humans and nonhumans alike.

1. The Independent School for the City is a post graduation laboratory on contemporary Urbanism in Rotterdam – if you don’t know it, here comes a big recommendation to check out their program – they also have lectures and evening workshops!
2. Hamilton, C. (2017) Defiant Earth, the Fate of Humans in the Anthropocene. Polity Press, Cambridge
3. Sijmons, D. (2021). Waking up in the Anthropocene. Unpublished manuscript. Independent School for the City, Rotterdam. 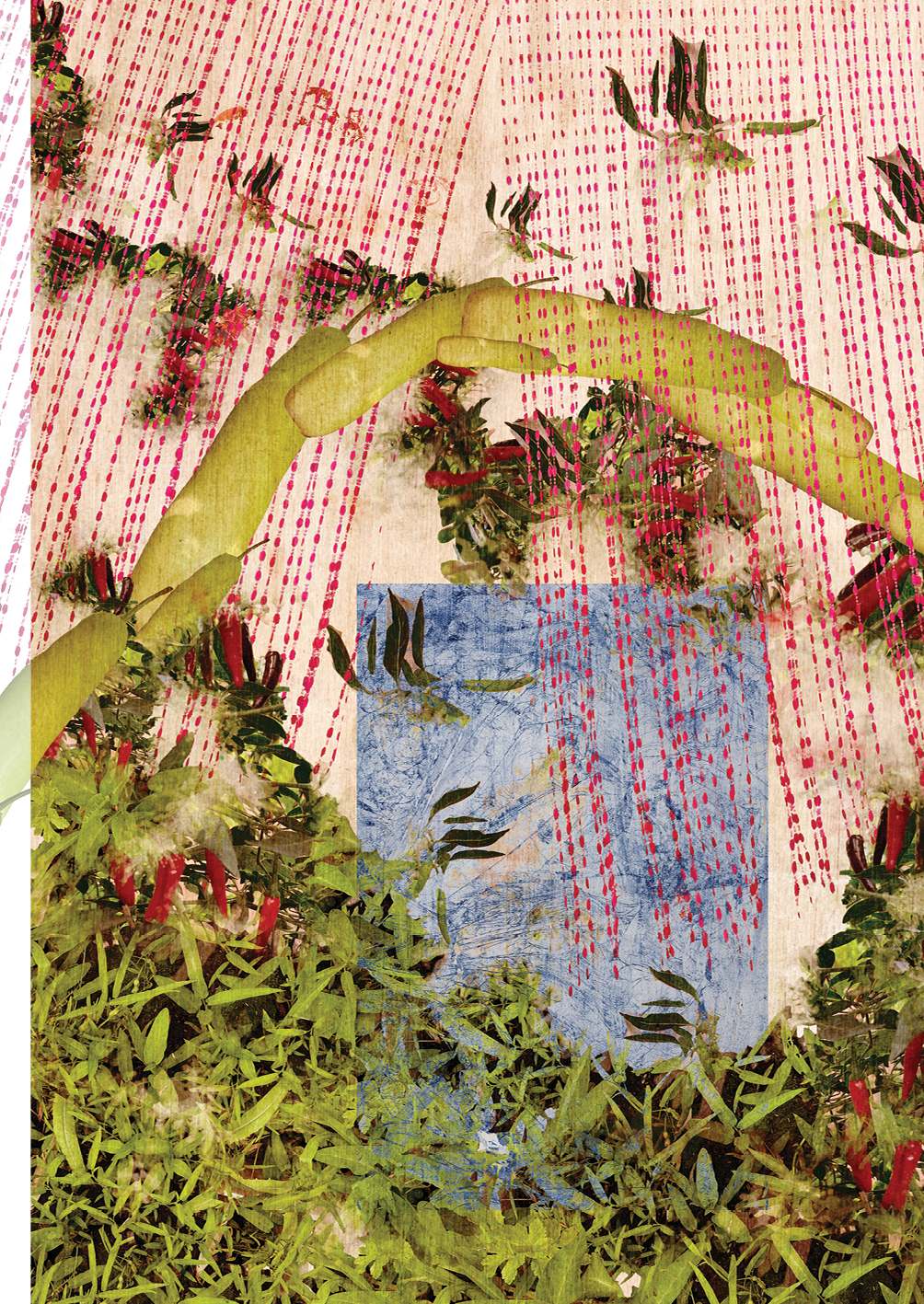 Diamond in the Rough, Forever Young 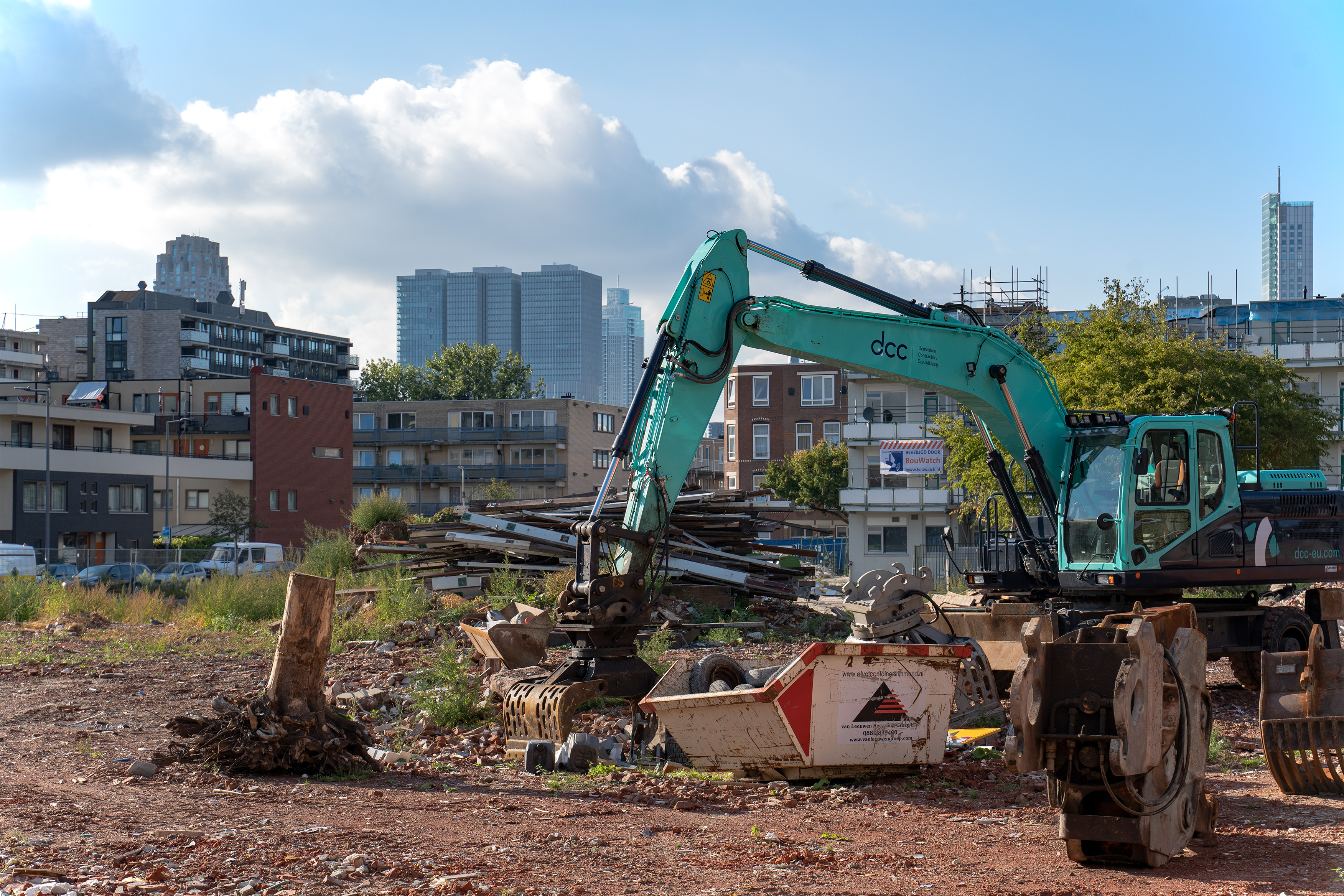 Rotterdam. The city you identify with, the city you belong in. The city that suits you perfectly, where you feel right at home. The city whose flaws you look past, or perhaps cherish because, well, ‘they give the city their character’. The city you moved to because you felt you had outgrown Delft, and you were looking for a new world to explore. If you recognise yourself in any of these statements, I’m sorry to tell you this but you’re unknowingly playing a role in a scheme that might be some 40 years in the making, and it has serious consequences. 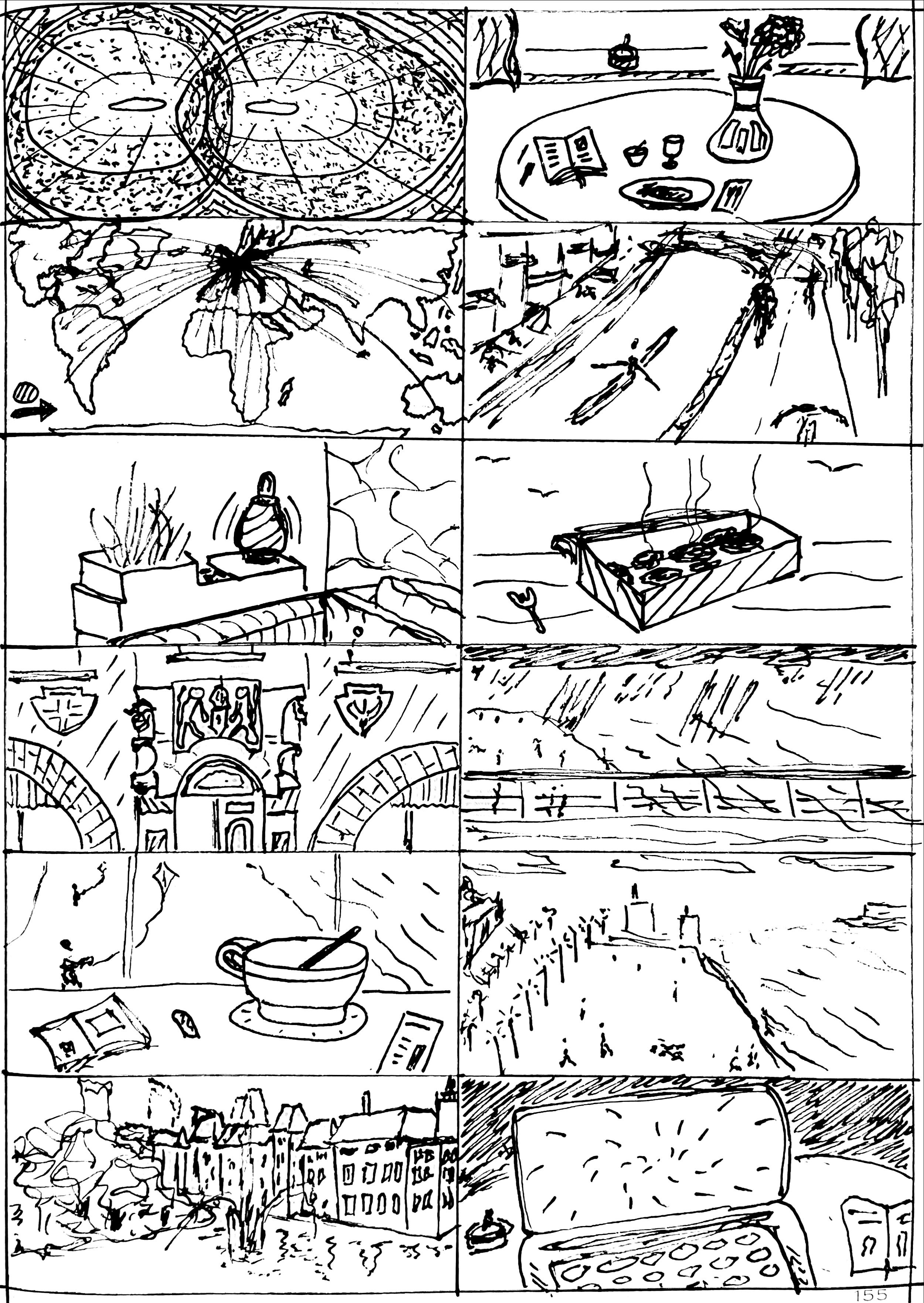