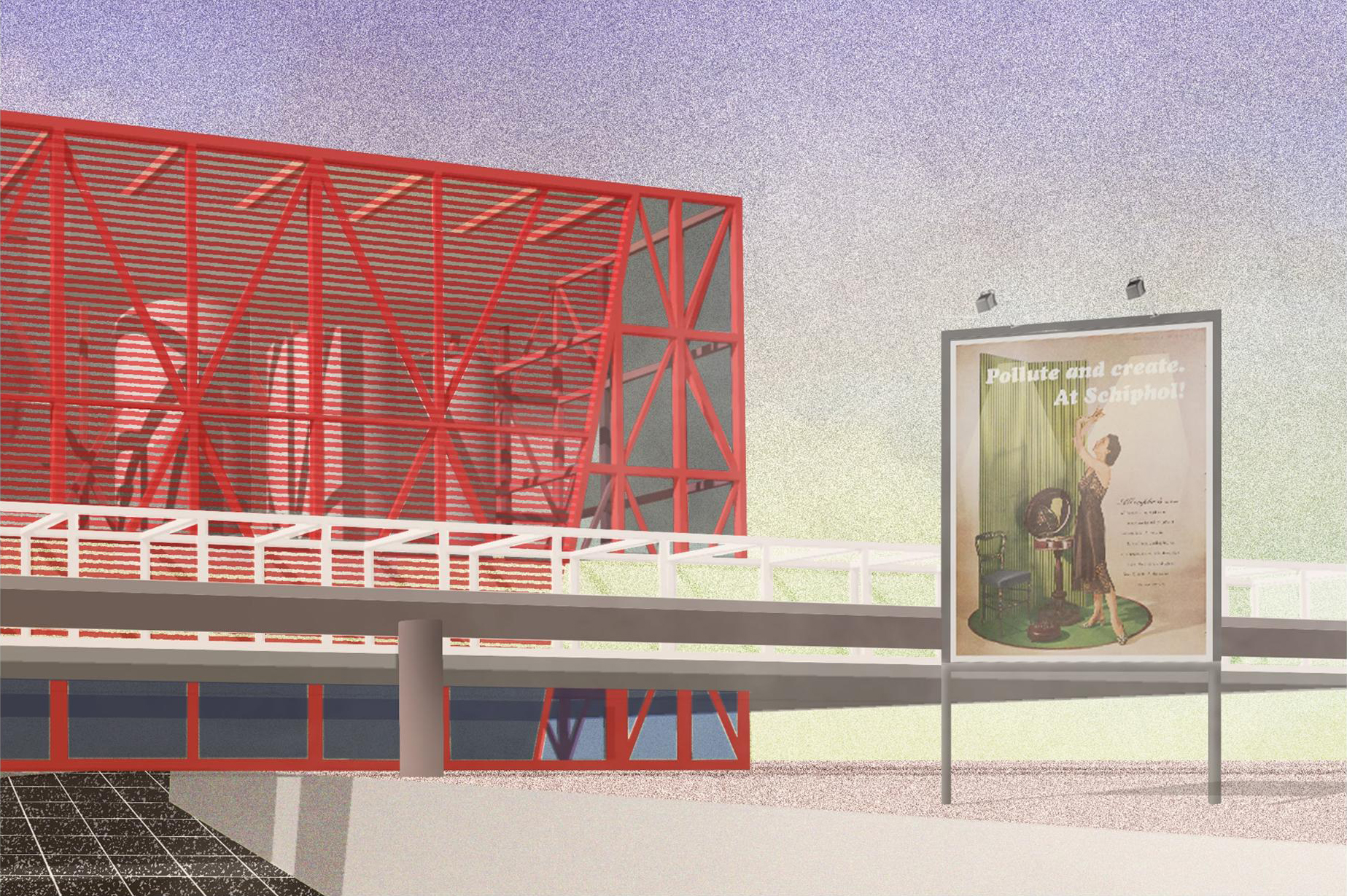 Pollute and Create at Schiphol Airport, digital collage by Katarzyna Sołtysiak for The Circular Brave New World, a.k.a. Diamond Factory, 2018

KS: I know that you are quite ambivalent about the topic of greenwashing, which I asked you to talk about.

ES: So much has been already said about greenwashing and yet, it still happens.

KS: Let us begin from the early stages of our personal experience then and refrain from big words. How many times have you seen a visually pleasing, interesting studio project and then, only for the sake of passing the building technology module, a student adds on random gimmicks to it? Solar panels being the most obvious.

ES: Currently, the bar for sustainability is so low, anything is better than nothing. Tutors accept this approach knowing that “at least the students had thought about it”. In a way, also students having so many things to touch upon, simply focus on the formal design. It is often accepted that if a project is good, you can ignore the “sustainability part” or just add a green roof somewhere... and this is not challenged.

KS: Learning ‘step-by-step' may be a reasonable excuse here but then, the issue of “sustainability as an afterthought” is taken to the professional practice...

ES: Let us consider the mainstream architecture, or what is perceived as such - for example, BIG Architects...

KS: Bjarke Ingels has been recently called "this Century’s Frank Lloyd Wright” on one of the most popular design websites. A few weeks earlier they made a masterplan for the planet, supposedly a sustainable one ...

ES: On the same website, BIG's projects are hailed as leaders in sustainability and very few contest this. As little autonomous bubbles, BIG’s projects might appear extremely sustainable at a superficial level. But then, you look at the scale of their developments, or even location, like the Middle East. The buildings on their own do not pose an environmental threat – it is the whole system and the industry. This, to me, is greenwashing at a deeper level: on paper, a project is “green”; but, together with its overall context – physical, economic, social, etc. - these mega-projects are actually green merely in colour. Adding hanging gardens and a state-of-the-art ventilation system is not good enough if you are ignoring fair working practices or the fact that your client actively rejects the idea of climate change.

KS:  With all this in mind, I wonder, if we can diminish the role of Ingels in giving character to  sustainability. In making it ‘fun’ and ‘cool’. There is a terrible tendency in a majority of LEED and BREEAM-certified buildings to homogenize their design. If those certifications are equal to buildings’ minimal impact on the planet – this is another question.

ES: I think around when BIG started, they came up with the idea of “hedonistic sustainability”, that sustainability shouldn’t be a chore but a fun thing. My understanding is this: you keep your capitalist, consumerist, hedonistic lifestyles and still have a sustainable project with our ‘smart’ approach. But can a project that reinforces capitalism and consumerism, which are intrinsically unsustainable, claim to be sustainable?

KS: The idea that if capitalism and all its workings brought us here and can also get us out of here: we just need to invest in the right solutions. The so-called technological approach... I wanted to believe in this idea, it seemed so easy, full of opportunities – especially for an ambitious student. Well, this lasted about as long as the time between being accepted at a school of architecture and entering it.

ES: And by the time of your graduation, you became an outspoken critic of it...

KS: Looking into CO2 emissions per country per capita, you see that countries investing in technology - or leading manufacturers - are characterised by high emissions. On its own, this comparison does not link technical sustainable solutions with pollution. Yet, it can give us something to think about. Why are rich countries, with the generally more regulated building industry, the leading polluters? And then, we start to look into carbon trades: large amounts of resources are their carbon footprint follows. This is still driven by the market. As a rule of thumb, developed countries tend to import carbon with products, while developing countries - with generally fewer climate regulations - export it.

This story was the start of a project in which bad policing, neoliberal economy and greenwashing clash. Schiphol Group - the owner of the third biggest airport in Europe - invests in an air recycling plant to allow a new terminal construction with additional funds from the Netherlands Green Fund. Carbon emitted by aircraft is recycled here into diamonds - an idea I had after learning that captured CO2 can be further recycled into…fuel - a perfect, never-ending cycle. As the air traffic increases, the resources multiply; emissions of carbon dioxide and carbon monoxide increase.

ES: Where is the twist?

KS: As the entire process was based on scientific research, it was clear that a huge amount of energy will be required by this process; yet, it was impossible to calculate how much exactly will be required. What was possible, on the contrary, was to calculate the amount of steel in the design and then the carbon footprint of the material. It was immense. By some very rough estimates, it would not be vacuumed by the building in its life-cycle.

I simply hope this shows that designers should take into consideration the social, environmental and political impact of the materials they use. We need to think about more local, smaller loops. And perhaps, put more faith in low-tech solutions?

ES: I agree. For example, the renovation project at Cove Cottage (with Sam Eadington) was driven mostly by the small budget. But because we had to make materials at our disposal and our own labour go a long way, it forced us to come up with inherently sustainable solutions. Everything that could be saved was reused; even nails that had to be pulled out carefully, so we can reuse both the wood and the nails. We had to make the most of what we had, and reduce our construction waste as much as possible. This also resulted in choosing local suppliers.

KS: Have you consciously decided to make this project sustainable or was this a by-product of your labour-intense search for cutting down the costs?

ES: It was consciously sustainable in the sense in which it was an inherent part of our design ethos in general terms: about reuse, about adapting what we’ve got, reducing waste, hands-on working, which are intrinsically sustainable. At Cove Cottage we wanted to maximise what was already there, so put most of the work and budget towards insulating, changing windows, and buying the absolute minimum of new materials.

KS: Do you see this approach being scaled up, not doing all the work on-site yourselves but the works being commissioned to contractors?

ES: Cove Cottage was a small, self-built project, but the lessons can also be extrapolated for bigger projects, it’s just more challenging. The projects by Lacaton Vassal show that it can happen on a bigger scale, it just requires a lot of care, ambition and skill from the architects. They put a value on adaptability, reuse, flexibility, and seeing previously obsolete buildings as opportunities, and waste as a resource, and it ended up way cheaper.

On the other hand, Sala Becket by Flores & Prats required the architects to be on the site almost daily, coordinating the trades, materials, and overseeing the construction actively. Finally, they admitted that they made no money from the project because it was so demanding and it did not allow them to run the office on a daily basis. The contractors, the local craftspeople made a profit on Sala Becket, which is great, but the architects didn’t make any money.

KS:  Ironically, I do not think your renovation project or Sala Beckett would receive any ‘green’ certification… and this is again the problem of narrowing down the understanding of sustainability. The misconception of sustainability as energy-efficiency may be understandable due to the pressing issues of climate change, especially in the capitalist narrative of austerity. But to build resilience, long-term solutions are needed and these need to involve communities, systems of funding and the well-being of local species. How about cutting down native forests to grow bamboo for construction? How about solar panels after their 25-year-long life-span?

It is particularly interesting in the Dutch language how the word for sustainability is “duurzaamheid”, meaning something like “longevity”, or “durability”, which brings in a very different take on the subject. Talking about duurzaamheid the focus is placed on practical, environmental, or material aspects of sustainability.

This makes me think that ’sustainability’ has become a banal word and its vague meaning is rarely disputed. Young practitioners need to position themselves towards the topic and build their unique understanding.

ES: Yes, but this is where it starts from, and that's why I think there isn’t enough of a push for thinking about it more holistically, as an inherent part of the design. What happens to the projects, especially student projects, with a focus on different aspects of architecture, that are more theoretical?

KS: Well, can we even afford to build non-sustainably at this point? I understand that other aspects need to be explored, especially in academia. The worst thing that happens though, is when you end up designing completely ignorant of sustainability, and then at the end, you end up adding tons of solar panels just to tick off a check-list.

Katarzyna Soltysiak, currently a member of Delft’s Team for Solar Decathlon, practices in many design fields and actively investigates topics of the circular economy. Ecaterina Stefanescu co-founded Estudio ESSE and is an architecture tutor at the University of Central Lancashire in the UK. 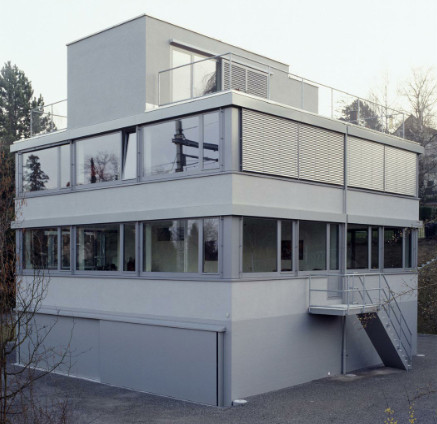 Based on the late-nineteenth-century parlor game, made fabulous by answers from Marcel Proust, The Berlage Questionnaire is a series of questions posed to guests after their public online lecture about their lives, thoughts, values, and experiences to reveal their wit, character, and personality.

An Introduction to The Invisible Architect 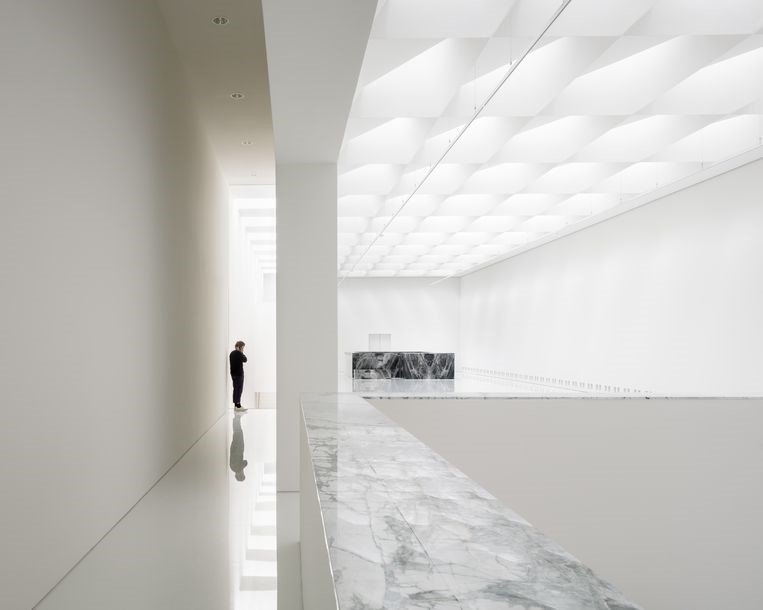